There is little doubt how this will end, but in this moment captured by ones and zeros there is fleeting hope – some time left on the clock, some sun remaining into which the bull may escape before the cape and sword end all pursuits in a final eclipse.

There is fodder here for those who decry the barbarity of the sport and its traditions, and there is a nod to the art that its proponents defend.

It isn’t my favorite peak action shot from my Summer 2014 trip with my sister or an image that romanticizes the event, but it is my favorite image from La Corrida.

For me, it is an image of contrast with little discernible middle ground – a razor thin, tenuous line between humanity and my adoration of art, culture and tradition that I find myself straddling every time I attend these events.

Has anyone else attended the bullfights or encierro? Thoughts? Observations? 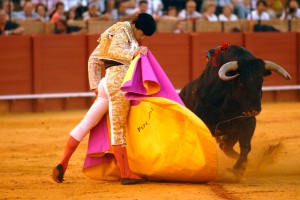 2 thoughts on “Somewhere between life and death”